Love rumored to get 2nd crack as Ryder Cup captain

Love rumored to get 2nd crack as Ryder Cup captain

Davis Love III is expected to be named the next U.S. Ryder Cup captain during a PGA of America announcement next week, according to the Golf Channel.

Love, whose U.S. team lost in excruciating fashion to Europe in 2012 at Medinah, would become the second straight repeat captain, following Tom Watson, whose U.S. squad suffered a 16 ½ to 11 ½ defeat in September. 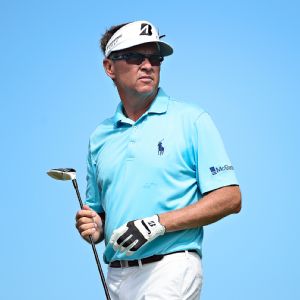 That loss at Medinah was the source of considerable acrimony and led to the formation of an 11-member U.S. task force, of which Love was a member.

The idea was to bring new approach to the process of selecting captains, assistants, the formation of the team and even the practice structure going into the 2016 matches at Hazeltine in Chaska, Minnesota.

The task force met two weeks ago in San Diego and it is unclear if it made a recommendation or if the PGA of America decided to go in this direction on its own. The organization which runs the PGA Championship and the Ryder Cup in the U.S. would not comment on the report and said only that there would be an announcement next week.

Love's squad was a tough-luck loser at Medinah, blowing a 10-6 final day lead, the Europeans staging a furious rally to win 14½ to 13½.

It was the second straight defeat for the U.S. by that margin.

Watson was named 2014 captain later that year and became the first repeat captain since Jack Nicklaus had done so in 1983 and 1987. Watson was the last U.S. captain to win overseas, doing so in 1993.

Fred Couples came up often in speculation for the next captaincy, given his 3-0 record as U.S. Presidents Cup captain. He also served as an assistant on Love's 2012 team. Steve Stricker was mentioned as well, as was Paul Azinger, who was the last U.S. captain to win, in 2008.

Love, 50, is a 20-time winner on the PGA Tour who played on six U.S. Ryder Cup teams and was a popular captain in 2012. Many of the players on that team expressed regret at the way the matches turned out and that they let him down.

In subsequent interviews, Love suggested he might be open for a return, but not soon.

"My experience has come and gone,'' Love said during a November 2012 interview. "What I've learned is that I'll always be a former Ryder Cup captain. All the things that are behind the scenes that I'll get to share inside the group, whoever the next three or four captains are, that part I really appreciate the experience.

"They asked me to do two things, promote the game, promote the Ryder Cup, be an ambassador for the game. And then to win. We did really well in one part of it and then we just got beat. I don't think they'll ask me to do it again. I don't think you could do much better.

"I would feel bad if I took another team and tried to go win because didn't win with this team. That was my team and I don't think I'd ever want to change that. If they decided they had a gap down the road and decided they'd love for me to do it again. ... maybe.''

The Europeans are expected to name their captain on Wednesday, with the choice down to Darren Clarke and Miguel Angel Jimenez.