PINEHURST, N.C. -- Phil Mickelson is making a significant change heading into the U.S. Open at Pinehurst, going to a "claw'' putting grip -- one he has used in the past but not significantly this year.

Mickelson experimented with the grip during the final round Sunday at the FedEx St. Jude Classic in Memphis, Tennessee, where he matched his best finish of the year on the PGA Tour, a tie for 11th. But the five-time major champion, who is attempting to complete the career Grand Slam this week at Pinehurst No. 2, has not been pleased with his putting and felt the change would help on difficult and speedy greens.

Mickelson said he wants to "have a little lighter grip pressure and create a softer roll so that I get some of the hit out of it. I was running them way by last week and by taking my bottom hand off the putter, it eliminates some of that hit. Allowing me to kind of roll the ball softly into the hole.''

He worked with putting guru Dave Stockton on Tuesday morning prior to a practice round with Jordan Spieth, Justin Thomas and Rickie Fowler. Mickelson said he often uses the "claw'' grip -- which for a left-handed golfer means the left hand does not grip the club in the palm but guides it with the shaft between the finger and thumb -- during practice rounds.

"I want to have more of a longer, smoother stroke on these greens,'' he said. 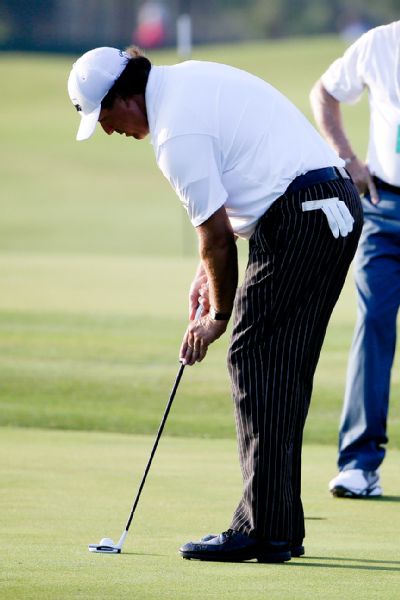 Although his game has been uncharacteristically spotty for most of this year, Mickelson -- who turns 44 on Monday -- remains optimistic about winning the U.S. Open after a record six runner-up finishes, including last year to Justin Rose at Merion. This will be his 24th U.S. Open and Mickelson loves the course, where he suffered his first close call 15 years ago to Payne Stewart.

"This place is awesome,'' he said. "It is just a wonderful site. I really believe that this week is testing a player's entire game. Because it forces you to make decisions, make good decisions, to choose the right club off the tee, hit solid iron shots into the green, and utilize your short game to shave strokes.

"There's no luck involved with the hack-it-out rough that sometimes we have around the greens. It's just a wonderful test that is I think the best test I've seen to identify the best player.''

Mickelson's quest for that honor has been shrouded in doubt due to his uneven performances this year. He has missed three cuts, including those at the Masters and The Players Championship. After shooting 63 in the third round of the Wells Fargo Championship to get into contention, he shot 76 in the final round. Last week in Memphis, he opened the tournament with three straight rounds in the 60s for the first time since March 2013, only to let a chance to win slip away on the back nine. He had a tie for second at the Abu Dhabi Championship on the European Tour in January, but even there had a back-nine triple-bogey and missed a playoff by one stroke.

"I feel as good about my game as I have all year; it's not saying a lot because I haven't played well all year,'' he said. "But last week was a good week for me. I started to slowly put it together.''

As for the putting switch, Mickelson said he could go back.

"It may be a spur-of-the-moment thing, I don't know,'' he said. "Right now the game plan is X, but it can certainly become Y in a matter of minutes.''

Apparently it didn't go so well...

Mickelson, however, lamented a putting stroke that has been giving him fits this year and caused him to switch to a different grip this week. Following his round, he went to the practice putting green before meeting with the media.

After an opening-round 70 at the U.S. Open, Phil Mickelson knows if he can fix the putter, he'll at least have a shot on Sunday, writes ESPN.com's Gene Wojciechowski. Story

"The one club that's hurting me is the putter," Mickelson said. "So I've got to get that turned around in the next couple of days."
But putting remains the aspect that frustrates him, evidenced by the 31 putts he took during Thursday's round. Mickelson went to a "claw" putting grip on the 11th hole Sunday of the FedEx St. Jude Classic in Memphis. He said he would use it again this week, although he doesn't appear committed to it long term.

"I like putting conventional," he said. "It might be weeks, it might be months, it might be days, hours. I don't know. It's just one of those things. Last year I putted just so well and I've kind of overdone what I was doing. I've got to kind of settle back in.

"The claw helps with my alignment, it keeps my lines straight and it takes some off the pressure and hit out of it with the bottom hand. So when that starts to go away, I'll go back to my natural grip."

Well that didn't last too

Well that didn't last too long. On the 2nd hole of round two he was back using a conventional grip...made 2 straight birdies.

Phil seems to have lost his touch, but worse yet, it's probably in his head now. Putting doesn't work without confidence.